“See? We DO have ravens here.”

“What is that one doing?  Is it trapped in the mesh?”

I glance out the window with the children who have excitedly gathered.  One raven is plucking at the tangled mass of “deer proof” mesh that I attempted to cover my new basil, rosemary, and oregano plants with last week when we planted them. Thinking of Jeremy the young crow from Mrs. Frisby and the Rats of NIMH, I open the sliding door. The raven flutters backward, not trapped.

“Let’s watch and see what it does,” I say, proud of myself for recalling the idea of becoming a nature mentor in How to Raise a Wild Child.

The raven returns to the mesh and stalks around the entire mass.  He is obviously very interested in it.  The other raven continues to watch from a distance.  The first raven arrives back at his original spot and begins to peck at the mesh again.

“There must be something trapped there!”

And then I see it.  A writhing black snake.  No one noticed it at first, since it looked just like tangled bits of mesh against the dark bark.

I decide we must investigate.  A bird of prey eating a snake would be a cycle of life lesson.  But an animal inadvertently trapped in plastic by me?

We troop outside.  The ravens take to the trees; we inspect the snake.

Likely an eastern rat snake like we saw on our deck last last year, is the verdict from the 12 year old.

I send everyone running around the yard to find a forked stick to pin the snake’s head down.  Isn’t that what they do on TV?  A garden fork will have to do.  As you can see from the picture, the fork did nothing since the snakes head was so skinny! 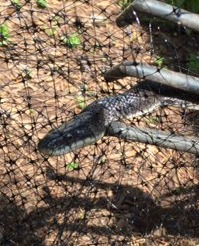 The 12 year old holds the snake’s head while someone brings me scissors.  I start attempting to cut the mesh.  This is one tangled snake.  More children arrive and someone brings my phone so we can take a picture.  I clip carefully and see fluid oozing from the damaged scales where the plastic has cut into the snakes flesh.

The 5 year old asks: Is it poisonous?

The 12 year old replies that it is just a constrictor.  At that moment I’m suddenly aware of powerful muscles coiling around my ankle.  The 15 year removes the snake’s body from around me and holds it away from me.  I continue to clip.  Once partially freed, the snake begins to writhe forward, entangling itself more.  Incredible muscles!

Finally the plastic mesh is completely cut away.  My boys transport the snake to a shady, plant-filled area of the yard and release it.  The other children remove all the mesh from the plants.  I have to cut some of it free of the wooden stakes beside my plants.  This stuff is treacherous!

With the snake freed, the mesh properly disposed, and the scissors in the dishwasher, I return to preparing dinner.

The whole  experience probably took less than 10 minutes total, but it felt like an eternity — a random act of wildness for the day, close to home.

One thought on “Day 3’s Random Act of Wildness”