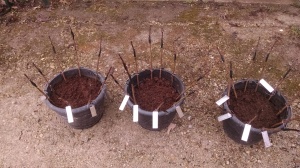 Today, I finished grafting my 50 apple trees for the spring. Last year, I grafted two. Both died. This year, I changed things up a bit: a good left-handed grafting knife and M7 root stock that looked extraordinarily robust. Of course a lot more practice may help.

Nothing provides good cross-pollination better than a crab apple (Malus angustafolia). I grafted some Virginia Hewes Crab, a good cider apple which also traces its lineage to Jefferson’s estate, and Young American, which produces large fruits perfect for making jelly.

My absolute favorite variety this year is Kaz 96 08 15, a Malus sieversii. Why? Because it is the apple, a scion wood from one of the apples that started it all in Kazakhstan. I don’t care what it tastes like, though I am quite curious. All Malus domestica – the apples we eat every day, buy from the grocery store, and grow in our orchards – are descendants of the wild Malus sieversii.